Sadly, Tasmania is burning and it just has everyone on edge and filled with sadness. The fires began in our wilderness areas from lightning strikes from a dry storm we had a few weeks ago.  They seem to be spreading from west to east.  They have now approached residential parts of the state in the southwest and central highlands. People are evacuating everywhere.

Tasmania has very good fire management strategies and so far there has been no loss of life though a few houses have now gone.

The smoke not only blankets our state, it has been reported that it has reached New Zealand.

Fires are unrelenting in our high temperatures blanketing out state and they really cause people to feel depressed.  I feel very sad for the people leaving their homes for evacuation shelters and camping in large football ovals in this heat. I also feel very sad for the animals. Wildlife flee, people with horse trailers collect farm animals and move them to large paddocks that have been volunteered away from the fires. People really rise to the occasion and provide amazing relief on all counts.

Lots of donations being made to the dogs home and the woman who is organising paddocks for farm animals. A pet taxi service in Hobart has been collecting domestic pets and driving them to refuge as well.

One feels helpless watching. Everyone wants to do something but is not equipped to do more than donate money to those working. There have been warnings to stay away unless on official business. 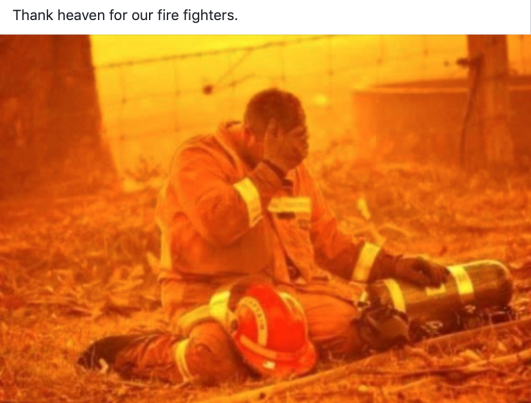 Of course there has been one looter caught and another in a campground in the eastern half of the state that is currently fire free lighting a large campfire. Both have been charged and will go through the courts. One can only wonder what these morons think about. There has also been some arsonist that started another fire that diverted one of the helicopters away from the main blazes to put this fire out. I must admit my thoughts run to the days of public floggings.

Like the rest of the country, we need rain. Except Queensland which has floods raging in the north. Isn’t that always the way. We also need politicians who believe in the science of global warming and aren’t pushing through a coal mine at the southern end of the Great Barrier Reef. (Again the public floggings go though my head.)

As far as books. I have finished up reading the books I wrote of previously and am looking for something that will hold my attention long enough to get out of this funk that quite a few of us find ourselves in.

There is a lot of photography work coming up for me in the month of Feb that will be mentioned later. But for now I just need to get this out of my system.

I know this will pass. Everything passes eventually. Just need to keep telling ourselves that.