When I look back on books read over the year I revisit the ones I remembered the most. Not always the ones that were the best written or won the most awards. I value the books that make me think a lot about the world or the person or whatever it is I need  mentally at the time I read it.

I won’t consult my Good Reads list of books read. If I don’t remember them I don’t need to look them up.  Here are the ten books that really stood out for me during the past year not in any particular order.  I am surprised at how many non fiction books there are. I think as I thought a lot last year about getting old and not being well most of the winter the lives of other people who overcame incredible experiences really inspired me. So many fictional novels seem to come and go but when I read the real story of a human being it seems to really resonate with me.

Down and Out in Paris and London by George Orwell (English non-fiction). This book is very descriptive of poverty in London and Paris during the 1930’s. It is George Orwell’s first published book from what I’ve read and the writing is excellent. I was so involved in his life living on the streets and I cannot recommend it highly enough. The information about how restaurants were run in Paris was enlightening and astounding.

The Trauma Cleaner by Sarah Krasnostein (Australian non-fiction).  The true story of Sandra Pankhurt, a boy brought up in an incredibly abusive family who realises he was living in the wrong gender. This story depicts the struggles and experiences of becoming transgender in Australia in the 1960’s to 70’s.  Don’t be put off by the title. Yes, Sandra did make a living later in life cleaning up houses due to traumatic or solitary deaths but the book is so much more than this. To all those who laugh or shake their head at transgender people should be made to read this book. I loved it. I also noticed it was Fuller’s Book Shop’s book of the month for this past November. They evidently really loved it too.

Great Expectations by Charles Dickens (English fiction).  I have not read much that Charles Dickens wrote. I thought it was time I did as I have heard so much about him throughout my life. Growing up in American schools we didn’t read Dickens. We were too busy with American Lit. I loved this book and I thought it was an excellent place to begin. I have downloaded David Copperfield for 2018 and hope to get to that before too long. It is a wonderful tale, the descriptions of characters are wonderful and I felt like I was shadowing Pip throughout the story.

The Residence: Inside the Private World of the White House by Kate Andersen Brower (USA- non fiction) This book was simply fun.  I enjoyed hearing about all of the anecdotes both funny and scary that went on in the White House from the time of Eisenhower to the end of the Clinton reign.  You have no idea how much I would like to read a sequel to this book about the White House and its occupant now. (shudders)

The End of Eddy by Edouard Louis (French Non-fiction).  A wonderful, wonderful depiction of this young author’s life growing up in France and coming to terms with his homosexuality.  He was 28 years old at the time this was published in the last couple of years.  Why the homophobes who condemn gay people is beyond me. The life of gay people coming to terms with their lifestyle and futures, dealing with their families, their marriages in many cases…why would anyone choose it. They often live lives of abuse from parents who give them no support, in a society who does not recognise the love they have for others. Thankfully this is changing but there is still a long way to go. I loved this boy, I loved this book. Hats off to Eddy. I hope he writes more books as he is gifted author.

Songs of a War Boy: The Biography of Deng Adut-a Child Soldier (Australian-Somalian Non Fiction) I think of all the books I read this year this one had the most profound impact on me. Kidnapped from his village at the age of 13, forced to fight in a war that was not his doing. Leaving his family behind. The descriptions of his illnesses on this journey, the terror, the fighting. Escaping Somalia, living in a refugee camp and finally coming to Australia without English. He learns English, catches up with his schooling and finishes law school at an Australian university. He now spends his life helping the cause of which is his homeland.  I wish our rich, able bodied politicians in Canberra at the moment could understand what people like Deng have endured and learned to triumph over their lives. A wonderful, moving, important story.

The Good People by Hannah Kent  (Australian Fiction).   As far as fiction goes I enjoyed this story to no end. The superstitions and lives of this family in Ireland almost two centuries ago was suspenseful, fascinating and the plot was different to anything I have read before. An extremely well written book by this young Australian author.

A Little Life by Hanya Yanagihara. (USA-Fiction) A coming of age story following four friends in New York City. It is not an easy read but it is also a read you cannot put down.  I won’t say much more as I don’t think anyone reading this blog hasn’t read it. All I could say when I finished was “Wow!”

Hillbilly Elegy by J.D. Vance (USA-Non Fiction).  I only finished this book the other day. I know it is taking America by storm and I can see why. JD Vance spent the first 12 years of his life in Appalachia Kentucky with his ‘hillbilly’ family. His mother was drug dependent, alcoholic and had five different husbands not to mention the boyfriends. J.D. was influenced heavily by his grandmother and grandfather and older sister. The family moved to Middleton, Ohio as many hillbilly families went to the industrial midwest for jobs. This book is a real statement on changes in society, the way people survive in this day and age and their views towards self determination and society where lately it seems everything wrong with the world is the fault of others.  It gives an interesting view and understanding of why Trump was so popular he could become President with all his faults. An important book especially for America and the rest of us in the world that wonder, “What the hell is going on in Western Society?” 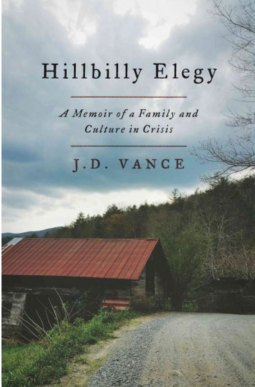 Reckoning: A Memoir by Magda Szubanski (Australian Non-fiction). I read this book because I love Magda’s comedy. I love her as a down to earth person who grew up in Melbourne and explains the plight of the immigrant children growing up in Melbourne during the 1960’s and 70’s.  She has struggled with her weight, her sexuality and wrote about her Polish family beautifully. She helped me appreciate what life was like during those decades for immigrant children. She is a joy. I was at a conference in Sydney a few years back and she was a guest on stage sitting next to the Dalai Lama.  When Geraldine Doogue who was the facilitator of this panel about lifestyle and happiness was carrying on as though the conference was about her and ignoring the Dalai Lama, Magda took over and made a point to include His Holiness in the debate being waged. Geraldine Doogue was rude and Magda saved it for me.

Sorry, I had to add in an eleventh book. Aunts Up The Cross by Robin Dalton reissued by Text Publishers (Australian Non-fiction) This is yet another memoir I read, this time a doctor’s daughter growing up in a very bohemian 1930’s King’s Cross in Sydney in a grand old home.  Tales of her aunts, the family disasters that were often quite hilarious and the life she led roaming the streets of Sydney at that time made for engaging story telling. Such fun!