Sunday here and I’m moving ahead here. Forget the post about splitting up or not splitting up book series.  I’m keeping them all and they will continue to live together with their families. Once that thought was out in the open I couldn’t bear to separate them all. Thanks for the comments about it.

Now..I’m going to begin reading some of the books from the various series I have and I went to Random.org to see what to read first.  Penguin Books published a series of 12 short books based on the names of the underground Iines of London.  Here is the list:

Last evening I read no. 3, The East London Line- Buttoned up by Fantastic Man.  The authors are Gert Jonkers and Jop van Bennekom from Fantastic Man magazine.

This book, published in 2014 was about the fashion that is East London in the mid 80s. Not just that but the ‘buttoned up’ look of the men who lived and worked there. Evidently, there was an entire culture about the buttoned up look. It actually started with the buttoned up to the neck look (some wore ties, others didn’t) of the Mods with their Lambretta and Vespa scooters as they railed against the rockers during the 60s and 70s. They could be loud and violent but their dress was quite upstanding as opposed to long hair and rough looks that was the mainstream music culture of the time.

Another look was the one the Pet Shop Boys had in the 1980s which is when the buttoned up look took off again. One of the Boys was sported a street look while the other was ‘buttoned up’ with the very top button of his shirt buttoned.

Who knew there was such a culture around the top button of a man’s shirt. Maybe people who lived in London were familiar but during those days I was living next to a cornfield in mid Michigan, so who knew?

One of the musicians from that time stated: “If I ever see a picture of myself playing, and for some reason I’ve unbuttoned my top button, I always feel a bit angry at myself,” he said. ‘I feel it makes a big difference to the way you wear a shirt. It’s really subtle but it changes an entire outfit. If I’m not buttoned up it feels a bit like something’s missing, like I’ve not finished getting dressed.’ 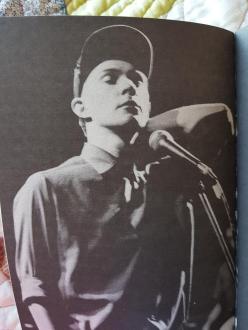 From another…“The man in a deep V is open, ready, disposable. The buttoned-up man has a flavour of some entrenched, considered mystery. We would’ve once considered him pretentious, if preferring books to TV can be adjudged as such. He does not favour the more expositional approach to male sex-appeal in his wardrobe. “

The various parts of London were evidently known for their street dress. An East ender would be buttoned-up without a tie. If you wore a tie you were even more conservative such as someone in the law profession. South Londoners sported the hoody. If someone had a jumper over their shoulders they were obviously from a ritzy public school. The buttoned-up are practically Edwardian in their style.

I got a big kick out of this little book. It is also full of black and white photos of various buttoned-up men models and the neighbourhood streets that make up the stops along the East London line. 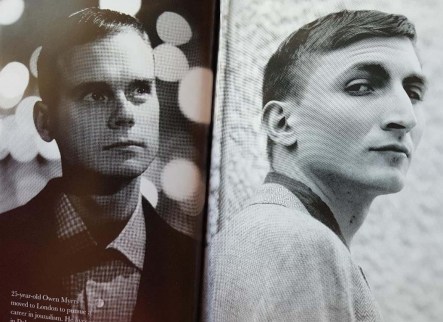 I have nine series in sets or boxed sets and I plan on dipping into them more often. For the reason they are generally about subjects I books I would not normally pick up if in a shop.  It will be interesting what adventures they hold and what new information will be imparted to this currently addled brain of mine. Time to relax and enjoy what is on the shelf.

Some Birds in the World-Wayfaring Wednesday