This has been a hectic week so today Mr. Penguin and I are having a Pyjama Day. It’s cold out. There’s been a lot of rain with more to come. It’s winter in Tasmania. Pajama Day is a day where you wear daggy clothes, stay home, read books, put a roast in the slow cooker and drink hot drinks…all…day…long.

Tuesday our play reading class made good progress on Mother Courage and Her Children by the German dramatist and poet Bertolt Brecht (1898- 1956).  It is an anti-war play rated as one of the most important plays of the 20th century. It takes place over a period of 12 years in 12 scenes.  The class is enjoying it very much.

Wednesday had our Writing Group admitting a new member. This week’s topic was “about a walk”. It could be a walk in nature, a walk you’d like to do, a walk you’ve done.  It has been a popular topic and we had a variety of perspectives.

I am also reading an interesting little book I found in the South Hobart Tip Shop. It’s called Circuit and is written by Francisco Jiménez. He was born in Mexico in 1943. He was the second oldest of nine children. When he was four years old his family escaped into the United States. The family worked as migrant farm workers. He started working in the fields with his family when he was six.  They would move with the seasons of crops and he missed a lot of school.  When he reached grade 8, his family was deported

back to Mexico but they legally returned a few months later. His father developed back problems not long after and that caused them to stop moving and he settled into school. He went onto Santa Clara University getting his B.A. in Spanish in 1966. He then became a U.S. citizen. Throughout school he and his brother supported themselves working as janitors.   He went on to attend Columbia University to get his Master’s and Ph.D. in Latin American Literature. He later married and had three children.

He wrote a series of books about his life as a migrant worker. I thought the book is relevant to what is happening in the United States now.  It appears to be written for a younger audience and I can compare it to a simpler version of The Grapes of Wrath but from a Mexican view point.  It raises important issues and details the hardships that migrant workers face between escaping a poorer, more dangerous life,  trying not to get caught by U.S. immigration officials. Mexican migrants work incredibly hard and American agriculture wouldn’t survive without migrant workers.

I picked this book up because I was drawn to the cover. I am really enjoying it and will be finished with it very soon.

On a personal note we had a bit of trauma with our brain injured cat, Uncle Buck (aged 12). We’ve had him since he was three weeks old.  He came home with me as a kitten from a veterinary practise I was working in at the time. He had been badly injured and wasn’t expected to live but 12 years later he is an important member of our family. He has neurological damage and as a result of that he only chews on the left side of his mouth. That means the right side gums and teeth need to be watched. He was to undergo a general anaesthetic but he crashed on the table so the procedure was aborted. This hadn’t happened before but our lovely veterinarians and their nurse got him back after a good five minutes and he survived. It was described to me by one of the vets as “controlled panic.”  We have been keeping a close eye on him. It turns out he reacted negatively to the anaesthetic and after Friday’s ultrasound we learned he has been diagnosed with cardio-myopathy. It pays to have health insurance on your pets. He begins medication next week and we are happy to report he is back to his purring self.

Thursday was a lovely day. I mean lovely. Sunny,  16 degrees and no wind. That’s 60 degrees to my North American friends and relatives. Mr. Penguin dropped me in town with my camera for the afternoon on his way to the gym. I spent the next couple of hours meandering through Battery Point and Salamanca as well as the waterfront for the next couple of hours. Both of us needed a very stress free day after the previous activities and events.  Battery Point is the oldest section of Hobart. The original settlement began here.  I include a few photos here. 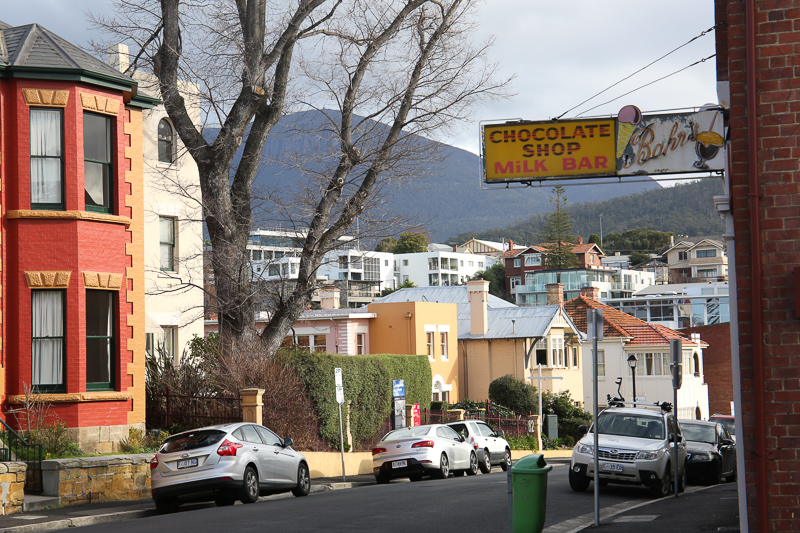 When I got home my friend rang me and said she was looking forward to us going to the theatre on Friday night. I said, “What?”.  We booked Sweeney Todd at the Playhouse some time ago and I hadn’t put it in the diary. As both of us laughingly state, “If it’s not in the diary it doesn’t happen.” So last night was a meal out and a three hour (including intermission) of Sweeney Todd. It was a musical and very gruesome. The story goes (in a nutshell). English man married with child. He gets transported to Australia for a crime and returns after 15 yrs. He meets the pie shop owner who falls in love with him. She tells him his wife has died. But a daughter remains and is holed up in a mansion with a lecherous judge who adopted her at a young age but now wants to marry her. He wants his daughter back but can’t get past the judge. The pie shop isn’t doing well.  The man is a trained barber but has competition. He ends up killing the competition and when trying to work out what to do with the body, they decide to bake him in the pies. The pie shop takes off because the pies are so delicious. To keep business going the barber continues to slash the throats of those in his chair if they are strangers or loners (no one will miss them) and keep the pie business booming.  I won’t give away anymore but the trend does continue with a few surprises.  We enjoyed the play but after three hours in a hot theatre we were glad to get out in the winter’s night air at 11:00pm.

This pretty much brings you up to date on last week’s wandering. I’m hoping for a quieter one next week.