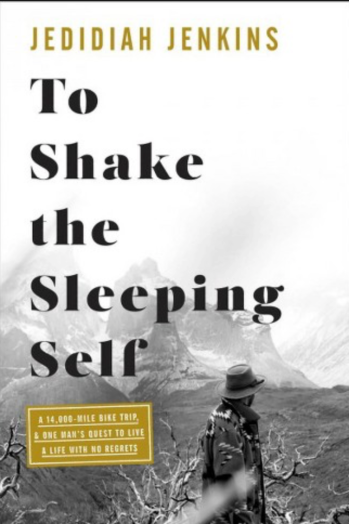 My favourite genre of books has always been travel writing. I enjoy reading books and blogs and looking at Instagram photos of people who travel a lot.  With my added interest in photography and street photography in particular, I can never indulge in too many of these books.

I am almost finished with an audible book I’ve been listening to by a young American, Christian, gay man (in his 30s) named Jedidiah Jenkins. The title of the book is To Shake the Sleeping Self.

He and a good mate ride their bicycles from Seattle, Washington to Patagonia in South America.  I am really enjoying their story.  He paces himself well with his writing and there are interesting conversations between the two friends about faith, gayness and being Catholic and the conflict that involves while also sorting his relationship to other family members. He grew up in Tennessee but moved to California once he became an adult.

His parents divorced and he was raised by his devoutly Christian mother who lived her life by the teachings of the bible.  His mother believes being gay is a choice and she does not understand why he would choose the lifestyle. She believes he can change if he puts his mind to it and will not accept her son’s truth.

He comes out more and more as he has time on his long rides through endless deserts to really get to know himself and think about all the issues that are raised. He has a strong Christian faith and his thoughts are interesting.

He also describes his mate, Weston well. Weston doesn’t have much money, worries

about nothing but is a really deep thinker about the world and the purpose of life. He has cycled through being born again Christian, Buddhist, Hindu, and is now an atheist. He also loves weed, mushrooms and tries cocaine once they get to Columbia.  He decides he doesn’t care for coke. He embraces life experiences completely and nothing seems to upset him on this journey. Their experiences with the local people, the hostels and camping they do off road in hammocks hidden from view, their illnesses and the beautiful places they visit really keep me interested in the story.

The audible copy I have is narrated by the author and he is a good writer and a great reader. I feel like I’m really in their heads as they experience this trip.  They took this trip around 2013 or 2014. They were on the road for more than a year and I’m currently in Ecuador with them.  I am assuming they make it to Patagonia but I have not finished the book yet so I don’t know if they’ll get there or not.

There are parts where I think he’s a bit self indulgent but I imagine if this were my trip I would be too,  simply because you’d have so much time to think. Some of the stretches of road they ride really do seem unending and writing about it and the thoughts that go through one’s head do tend to go on.

I remember in 2010 when I rode my 250 cc Scooter on a charity ride from Hobart to Longreach, Qld then to Rockhampton and back down the coast to Hobart. I rode 7300 kms in three and a half weeks.  There are very long stretches of very straight roads in Queensland that go on forever and I only had my own thoughts in my helmet.  I would sing songs from childhood I remembered, I relived lots of memories, I had creative ideas for future plans. You just don’t know what you’re going to think when on these long trips with only yourself for company.

I can recommend this book if you are interested in these topics.

Speaking of which….. I leave for Europe Friday week so stay tuned as I hopefully will have enough energy to write at the end of some days.  I should have time to write as I’ll be in a room by myself each evening as Mr. Penguin is staying home taking care of our menagerie and I’ll be with two girlfriends. We’ll see.  I will post some photos up on Instagram here and there but hopefully I can get a blog post or two together.